Make it ahead of time!

The stuffing recipe components can be made a day ahead of time. The first task is to cube and toast the sourdough loaf. You can use any bread you like, however, the sourdough adds a wonderful flavor to the stuffing. The toasted bread cubes can be put into an airtight container or a plastic bag after they have cooled. The pear and sausage mixture is the second part of the stuffing that can be made ahead. Cook the sausage and then set it aside. Keep all the dippings in the pan. Then add the fennel and onion and cook until golden brown. After that, add the pears and the herbs. When the herbs are fragrant, remove the pan from the stove and let the mixture cool. Place the cooled mixture in an airtight container or cover well and place in the fridge.

When you are ready to make your stuffing, just heat up the sausage and fennel mixture and add the broth. Pour the mixture over the toasted sourdough cubes and mix well. Cover the stuffing until the cubes have soaked up the broth.

Baking the sausage and fennel stuffing

The recipe is meant for an 8 x 8 baking dish. Bake the stuffing for 30 minutes at 350 degrees F. If you plan on putting the stuffing in your turkey, just follow the instructions that come with the turkey.

Don’t forget to include my apple pear crumble pie for dessert! 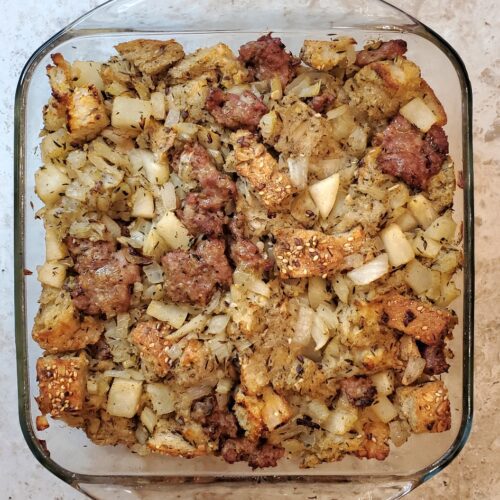 I have been making this sausage and fennel stuffing for 20 years or so.This recipe is for an 8 x 8 baking dish. I make more and stuff our turkey too!
No ratings yet
Print Recipe Pin Recipe
Prep Time 40 mins
Cook Time 30 mins
Total Time 1 hr 10 mins
Course holiday stuffing, Side Dish
Cuisine American
Servings 8 servings
Calories 296 kcal