This pecan shortbread recipe is one of the best cookie recipes I have ever tasted. This recipe is a must for your next cookie exchange recipe or Christmas cookie! This recipe is the perfect make-ahead cookie because they require a long chilling time. The dough is very easy to make!

The best way to measure flour is by weight. However the next best is measured by the spoon and sweep method. Also called the spoon and level method. Just spoon the flour into the measuring cup and level off with the back of a knife. Look at my post on measuring flour for more. Scooping flour out can lead to having up to 50% more flour than you need.

The cinnamon in the pecan shortbread recipe

Chilling and cutting the shortbread

Rolling the dough after it comes together is not difficult. This recipe makes two rolls. Just divide the dough in two and place each half of the dough on its own piece of parchment. I usually use a ruler to keep the log of dough tight and round. I usually keep the log around two inches wide. The logs need to chill in the fridge for two hours at the very least. The dough should chill for at least five hours. The dough can even go overnight which makes it a great make-ahead dough.

After the dough is chilled I usually slice around 1/2 inch. The mixture for the edge is easier to get rolled on after slicing the dough. The dough is usually still firm enough to stay round after you roll it in the mixture. After rolling the sliced dough in the mixture just bake and enjoy! 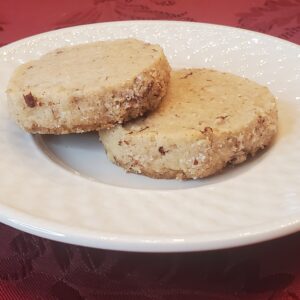 This pecan shortbread recipe is one of the best cookies I have ever tasted. This recipe is a must for your next cookie exchange!
No ratings yet
Print Recipe Pin Recipe
Prep Time 30 mins
Cook Time 14 mins
Chilling time 5 hrs
Total Time 5 hrs 44 mins
Course Dessert
Cuisine American
Servings 24 cookies
Calories 109 kcal